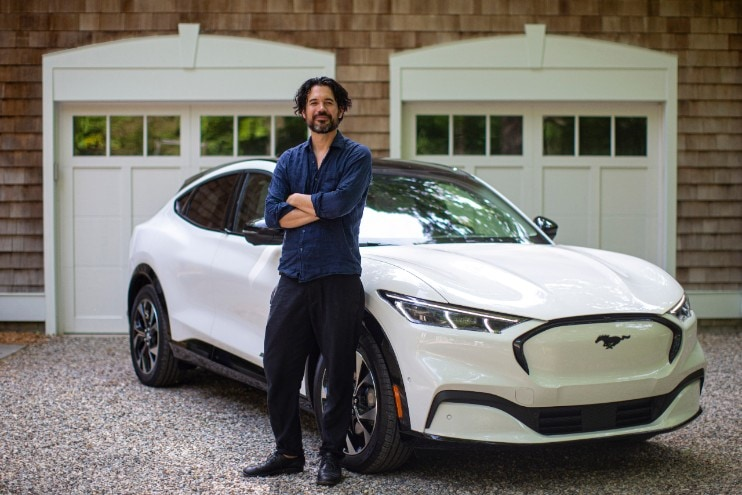 DEARBORN, Mich., Aug. 28, 2020 – The all-electric Ford Mustang Mach-E sounds like a sci-fi fantasy – so much that it inspired a Detroit-based electronic music artist Matthew Dear to transform its sound into song.

Inspired by classic ‘80s sci-fi cinema, Ford sound designers worked with the studio Ozone Sound to craft electronic oscillations that emanate in and outside of the Mustang Mach-E while the vehicle is in motion.

“The idea of remixing the sounds from the Mustang Mach-E was immediately interesting because I’ve always considered myself to be a ‘sound tinkerer,’” said Dear. “But after I got to actually hear and experience the digital propulsion sounds that Ford created, I was sold on the project. The sounds are cooler than I thought they’d be — cinematic and sci-fi — and all the noises the car makes have a sense of modern musicality. Creating “New Breed” was a new experience and I think the song — like the car — takes its passengers on a voyage.”

Since its debut, Mustang has been synonymous with music, inspiring songs throughout the latter half of the 20th century. With “New Breed,” Mustang Mach-E ignites a new generation of Mustang in music. Give the track a listen and see how Ford and Matthew Dear made the piece a reality by watching a short documentary here. Matthew Dear’s “New Breed” is now streaming on Apple Music, Spotify, Deezer, YouTube or where you listen to music.

DJ, dance music producer and experimental pop auteur Matthew Dear – who also maintains separate musical aliases Audion, False and Jabberjaw – is a founding artist of Ghostly International and its dancefloor offshoot, Spectral Sound. Dear has collaborated with artists such as Tegan and Sara and his remixes have been commissioned by the likes of The XX, Charlotte Gainsbourg, Spoon, Hot Chip, The Postal Service and The Chemical Brothers.