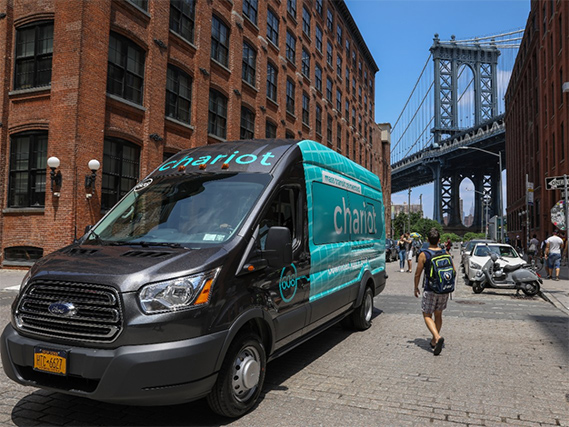 Chariot offers commuters, some of whom live in transit deserts – areas that are not within walking distance of public transportation – a new way of getting from point A to point B. During typical commuting times, Chariot shuttles will travel to busy areas where people work, then bring them back at the end of the day. Each Chariot comfortably accommodates more than a dozen people and guarantees seats for every rider.

“Our mission at Chariot is to provide reliable, safe and affordable transportation for as many people as possible,” said Chariot CEO Ali Vahabzadeh. “We want to connect people more easily to where they want to go – whether they need help making it to a transit hub or live in an area underserved by public transportation.”

New York is the latest market to get Chariot’s service, which is launching with two pre-planned service areas in Manhattan and Brooklyn, at a flat rate of $4 per ride. People can create additional service areas through crowd-sourcing. By this fall, Chariot plans to have 60 vehicles operating in New York City.

As part of the New York launch, commuters will be able to use a streamlined crowd-sourcing process to make the experience more user-friendly. The Chariot map will display service areas being crowd-sourced – giving commuters the chance to choose and contribute to these potential service areas.

Users can even create a custom route for areas they feel would benefit from Chariot, then share their proposal with friends, family and neighbors who may be taking similar commutes. Once enough riders sign up to support and fund a proposed route, as many Chariots as needed will be dispatched to service the area.

Using Chariot is easy. Riders simply check the app to find commuter routes near them, then reserve a guaranteed seat as they head toward their assigned Chariot. Keeping the service affordable is a priority, and solutions such as WageWorks and commuter checks – which allow people to use pretax wages to pay for commuting costs – are fully compatible with Chariot use.

Enabling commuters – wherever and however they choose

Not only does the sheer number of commuters make getting around difficult, but access for people in the city’s transit deserts is a particular challenge. While 94 percent of residential units in Manhattan are within half a mile of a subway stop, only 54 percent of units in Queens are, according to research by New York University’s Furman Center. For many, simply getting to a transit point can be difficult.

“We know how important it is for everyone to be able to get around effectively – especially in densely populated places like New York,” said Jessica Robinson, director, Ford City Solutions. “Chariot is one way we’re trying to help cities accommodate their residents and ensure people aren’t sacrificing their needs as a result of limited mobility options.”

Chariot can expand the reach of public transportation and offer first- and last-mile solutions to complete commuter routes. In San Francisco, where Chariot operates 12 commuter service areas, about 20 percent of riders use it to connect to transit hubs such as BART and Caltrain, or to ferry terminals.

The service can also be used to supplement public transit at peak commuting times, keeping large groups of people moving without the need for single-occupancy vehicles. According to a study conducted by KPMG, every Chariot in operation can remove about 10 cars from roads.

In addition to commuter service, Chariot is launching enterprise and charter services in New York City. Enterprise is available for companies that would like to provide shared commutes for their employees, while charters allow users to directly book a private 14-passenger Chariot for day trips or events.