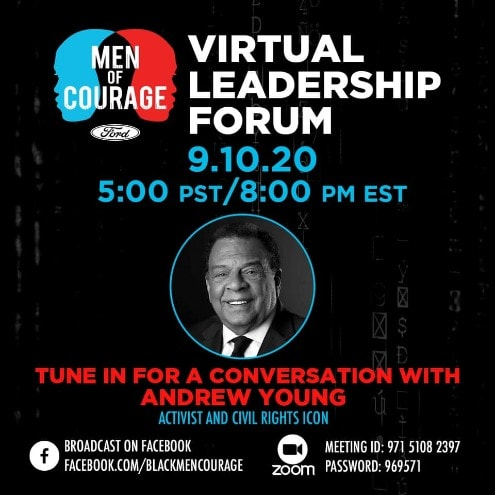 The virtual forum will consist of two parts- an invitation-only gathering will feature a cross section of aspiring entrepreneurs, venture capitalists, athletes, entertainers, global business leaders and community influencers in a digital roundtable designed to develop strategies, challenge stereotypes and strengthen the narrative surrounding African American men. A second portion will be open to the public where persons from around the country may register to join the last portion of the forum featuring our special guest speakers each evening.

“Since its inception in 2015, Ford Men of Courage has offered African American men a platform to advance their narrative and unite behind a common mission of uplifting their families and communities through economic mobility,” said Pamela Alexander, director of community development, Ford Motor Company Fund.

The forum will then open to the public nationally each day via Zoom at http://bit.ly/mocleadership (Meeting ID: 971 5108 2397, Password: 969571) for an inspirational talk with Ambassador Andrew Young, and keynote address from Shaka Senghor.

Ford is also launching the Ford Men of Courage Game Changer Award, which will recognize an outstanding organization going above and beyond to impact their community and further the narrative regarding African American males.

Online nominations for the Game Changer award will open nationally at fgb.life/men-of-courage for eligible nonprofit organizations both evenings in partnership with the Brotherhood Crusade and Los Angeles Urban League. The top three finalists will have the opportunity to pitch their vision to a larger panel of community leaders and influencers. The winner will receive a $5,000 grant to advance their initiative. The deadline for submissions is October 10, 2020.

Ford Fund encourages participants nationwide to join the conversation each day at 8 p.m. EST, 5 p.m. PST and to download the Men of Courage digital tool kit at fgb.life/men-of-courage to continue the discussion in their own communities.