Don’t let hail damage slow you down. Come in for a complimentary evaluation!
Our advisors will walk you through every step to help ease the pains of the repairs.
Let our award-winning team help get you and your vehicle back on the road fast.

Hail caused $8 to $14 billion in damages every year over the last 20 years, according to the risk assessment company Aon. So, if you live in Dallas, you've seen it hail. It may not happen every day, but you can count on dozens of hail storms every year. Hail can disrupt your life quickly, causing severe damage to people, homes, and automobiles. So, if you've been impacted by hail, you're not alone.

Nor do you have to go it alone. At Planet Ford Dallas, our body shop technicians have extensive training to repair your car's hail damage or any type of dent, scratch, or imperfection. We've seen and repaired dents and damage of all kinds and promise to restore your vehicle quickly and for a lot less money than you might imagine. 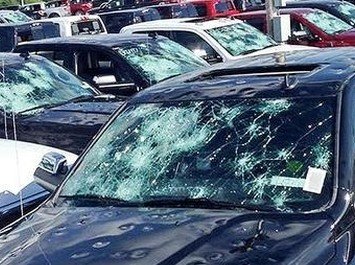 A dent occurs when something hard strikes the exterior surface of your vehicle with enough force to cause an indentation. Hail storms have a long history of denting cars around Dallas. So do tree branches, shopping carts, baseballs, car doors, and more. Your car's exterior dents because the hood, doors, panels, trunk, and roof are made of aluminum, steel, or some other type of metal. These metals have a rigid quality that keeps their shape until something hits it hard. Then, the surface gives way, leaving a dent.

A dent can come in various sizes and shapes depending on what strikes the metal and how the impact occurs. Dents can be small or large, shallow or deep. In many cases, dents can crease the alloy material of your car. The size of the dent determines the cost of repair, although there are other factors. How much damage the paint endures will affect the cost to repair the dent.

For instance, a hailstone might leave a small, shallow dent in your hood without creasing the metal or cracking the paint, but a stray shopping cart might hit your car door at an odd angle. Not only could it dent your door, but the odd angle could cause a scratch that penetrates your paint or creases the metal. Every dent is different and thus requires a professional to examine the damage before providing an estimate.

Your car's original paint and its general condition factor into the cost of repairs. It isn't uncommon for the paint on older cars to chip or crack due to hail damage. These conditions compound the issue. In addition, older cars have thicker metals that don't flex as easily as new, thinner alloys. This rigidity makes them harder to reshape, thus costing more to repair.

For decades, body shops repaired dents with special tools that pull the dents out. Unfortunately, these tools cause more damage to the metal than the hailstone. Also, the traditional technique doesn't leave a smooth, even surface.

Thus, body shop technicians must use body fillers to repair the remaining imperfections. After using body fillers, the technician has to sand and paint the entire hood, panel, or roof. It takes one primer paint coat and then perhaps several coats of finish paint to color match. Sanding and painting can take up to a week to complete and cost a lot of money because of the labor involved.

What is Paintless Dent Removal?

If the hailstone left a dent that hasn't damaged your paint significantly, you can take advantage of paintless dent removal (PDR). The PDR process takes less time than traditional dent repair, in large part due to the thinner alloy metals and polyurethane paints used in modern cars. In addition, these materials have better pliability, making them easier to repair.

At Planet Ford Dallas, our body shop technicians use state-of-the-art tools to return the affected area to its original shape without causing more damage or marring the paint. In addition, PDR technicians work from behind the dent on the inside. Thus, we don't have to use body fillers, sanding, or painting.

Can Paintless Dent Removal Work on Any Dent?

Provided your car's paint hasn't been damaged, PDR works on nearly any size dent. In particular, PDR works great on hail damage, as well as dents caused by rocks or other debris. Also, PDR produces excellent results on everything from a ding caused by another car door to minor collisions and fender benders.

Paintless dent removal doesn't work on all types of dents. This process can't entirely fix cracked and missing paint. You can still take advantage of PDR in these instances, but you'll still need to repaint to restore your car to its original condition.

In addition, we can't use PDR to repair double-walled metals. Because we work from the inside, the inner layer of the double-wall prevents us from reaching the dent. Creases and other sharp edges resulting from an impact won't qualify for PDR either. These conditions compromise the metal, preventing a return to a smooth finish.

The cost of repairing a dent using PDR varies based on the aforementioned factors. However, PDR costs much less than traditional methods. It takes less time and doesn't impact the structural integrity of your car than conventional repair techniques. Depending on the dent's size and location, you could pay as little as $75 for PDR or up to $500.

Get a Free Quote Today

At Planet Ford Dallas, we have the area's premier body repair shop. We provide ongoing training to our technicians to keep them updated on the latest PDR and collision repair techniques. So whether you have a car with damage from hail or some other accident, we can help.

You can conveniently schedule a service visit online or stop by our service center on Inwood Road at any time. One of our friendly, knowledgeable technicians will assess your damage and provide you with a written estimate. We'll review the entire process, including the time it will take to complete. So don't let that dent ruin your day or your car. Our technicians will have your vehicle looking like new in no time and for a lot less money than you might think.