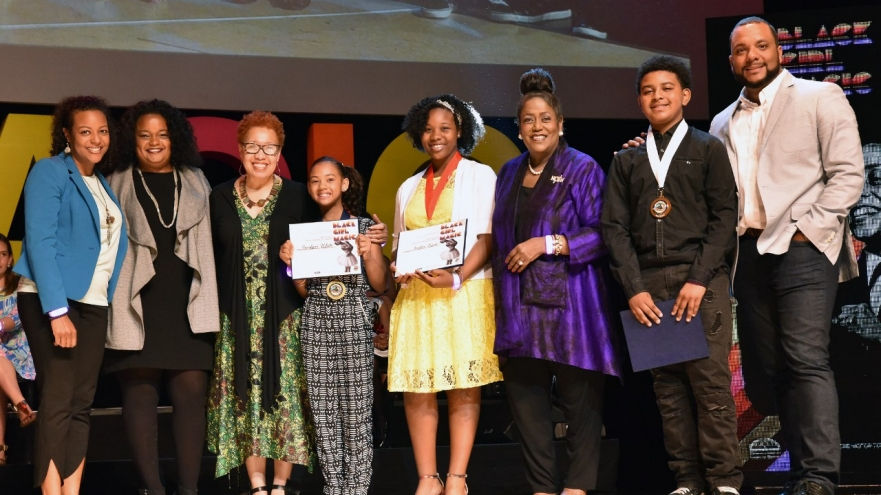 The Ford Freedom Award program was created as a platform to celebrate and recognize individuals whose achievements have brought forth lasting and positive change for the lives of African-American people – and for others around the world. The three-part program consists of educational outreach to middle school students, a nameplate installation, and the awards ceremony.

Lauding the power of women, this year's theme – “Black Girl Magic” – is symbolic of the achievements of legendary women leaders and celebrates the innovations of emerging female activists and entrepreneurs. The program consists of an invitation-only Ford Freedom Award Scholar’s Experience for nearly 2,000 middle school students to be held the morning of Tuesday, May 22 at the Michigan Opera Theater located at the Detroit Opera House.

Our 2018 Ford Freedom Award honorees are distinguished females who have dedicated their lives to achieving their dreams against all odds - improving the African-American community, inspiring Black youth and thereby positively impacting the world at large.

“For 20 years, Ford has proudly partnered with the Wright Museum to celebrate and honor African-American heroes and sheroes and this year is no different," said Pamela Alexander, director, Community Development, Ford Motor Company Fund. “The power of Black Girl Magic, as exemplified by Dr. Height is an inspiration to young girls and women around the world. We applaud this year's honorees for their achievements.”

The Ford Freedom Award Scholar’s Experience is presented as a highly interactive program with a talk-show type format. Students will hear from speakers representing technological innovation, business development, entertainment, fashion and education. Middle school students from around the state were invited to submit a two-page essay on a Black woman who has excelled in the same categories represented by our speakers. The top five essay contest winners will be announced and there will be a performance by the Syncopated Ladies, who have been lauded by performers including Beyoncé for their innovative and energetic tap-dancing. Later that same day, the program will move to the Wright Museum for an honorees luncheon and nameplate installation ceremony where the Ford Freedom Award will be presented.

The Ford Freedom Award was presented posthumously to Honoree Dr. Dorothy Irene Height, an American educator and prominent leader of the civil rights movement. Height was considered the “godmother of the civil rights movement” and was so honored by President Barack Obama in his remarks upon her death. She was one of the organizers of the famed 1963 March on Washington. Throughout her life she placed focus on issues concerning African-American women, unemployment, illiteracy and voter awareness. Height was an active leader of the National Council of Negro Women organization for nearly 50 years. She received the Presidential Medal of Freedom in 1994 and the Congressional Gold Medal in 2004. Notably, Height was also a Ford Freedom Scholar in 2008, making her the only person to be honored twice with a Ford Freedom Award. Ingrid Saunders Jones, chair of the National Council of Negro Women, and Alexis Herman, the former U.S. secretary of labor will accept the late Dr. Height’s award. Herman is one of a very few women, and the only African-American woman to hold this position.

The Ford Freedom Award Scholar is Jessica O. Matthews. Matthews earned an MBA from Harvard Business School and is listed on more than 10 patents and/or patents pending. Her first invention, the SOCCKET, is an energy generating soccer ball that she invented at age 19. The CEO power player founded Uncharted Power an award-winning renewable power company that specializes in harnessing energy from motion to create ecosystems of power for communities around the world.

Ford Freedom Rising Star Honoree is young entrepreneur Asia Newson, a Detroit teen who started a candle-selling business at age 5. She now manufactures her own candles and has a small army of youth salespeople. She educates and trains them for entrepreneurship. She now boasts of more than $100,000 in sales. Asia donates a portion of her proceeds to the homeless. Asia has been featured in national media such as the Ellen DeGeneres Show and ABC News 20/20.

“This year, The Wright proudly celebrates “Black Girl Magic,” illuminating the achievements, strength and beauty of women and girls,” said Juanita Moore, Museum president and CEO. “In recognizing Dorothy Height, Jessica Mathews, and Asia Newson we encourage all girls to believe in the power of their magic and live beyond the possible.”

Ford’s support of the African-American community dates back to the early 20th century when the company was the largest employer of African-American people in the auto industry. Now, Ford is building on that support with signature initiatives that include Ford Freedom Unsung, Ford Blue Oval Scholars and the Congressional Black Caucus Foundation’s Sojourner Truth Leadership Awards.