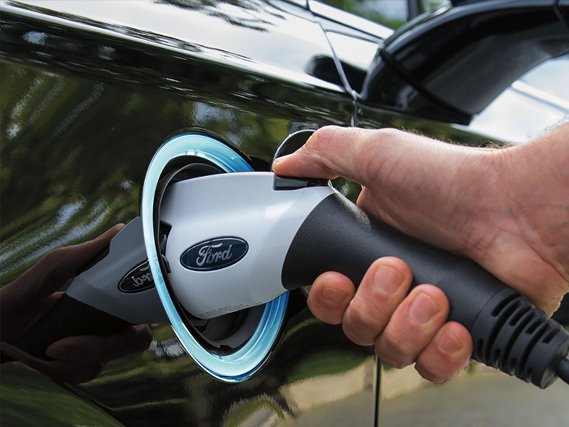 The Mondeo Energi, to be launched in early 2018, will be the first plug-in hybrid to be manufactured by the Changan Ford JV. Ford also confirmed plans to bring an all-new fully electric small SUV to China within five years.

China is the world’s largest new energy vehicle market thanks to strong government support and growing customer acceptance. According to the Society of Automotive Engineers of China, by 2025 new energy vehicles are expected to account for over 15 percent of total passenger vehicle sales in China.

“The time is right for Ford to expand our EV lineup and investments in China,” said Mark Fields, president and chief executive officer, Ford Motor Company, who will further detail Ford’s electrification strategy at a special event in Shanghai on April 8. “We are prioritizing our electrification efforts on China to reflect its importance as a global electrified vehicle market and to make lives better, simpler and more cost effective for Chinese consumers.”

To address the diverse needs of consumers in China, including the growing demand for EVs, Ford will offer a comprehensive range of electrified solutions by 2025 -- hybrids, plug-in hybrids and fully battery-powered electric vehicles. By then, 70 percent of all Ford nameplates will have electrified powertrain options, including the full range of nameplates produced by Changan Ford.

In addition, by 2020 Ford will start manufacturing electrified powertrains in China. It also plans to expand its new energy vehicle engineering capabilities at its Nanjing Research and Engineering Centre, with a focus on incorporating Chinese customer needs into Ford’s next generation EV technologies.

Leading in electrification is fundamental to Ford’s transformation into an auto and a mobility company. Globally, the company is investing $4.5 billion to electrify its most-popular, highest-volume vehicles for customers, offering more capability, productivity and performance -- together with better fuel economy. In January, Ford confirmed seven of the 13 new global EVs it will launch in the next five years, including the all-new fully electric small SUV that will be sold in China, and a hybrid autonomous vehicle designed for commercial operations in mobility services, starting in North America.

Expanding its EV portfolio in China, Changan Ford will start manufacturing the Mondeo Energi plug-in hybrid in Chongqing in early 2018. The Mondeo Energi brings the benefits of electrification without range limitations, easily adapting to customers’ lifestyles while saving fuel and reducing emissions. It will feature an electric drive range of up to 50 kilometers, fast torque on demand, smooth acceleration and a quiet operation.

The Mondeo Energi will allow drivers to use battery power around town and gas for longer trips, reducing the inconvenience and costs of frequent stops at the gas station during their daily commute. If the battery of the Mondeo Energi is running low, it can easily be charged at home or the office.

A Growing EV Portfolio in China

Ford will also bring to market an all-new fully electric small SUV to China within five years. The SUV will be engineered to deliver an estimated range of more than 450 kilometers and will be sold in North America and Europe, as well as China.

In November 2016, Ford China launched the Mondeo Hybrid, which is built in Chongqing by Changan Ford. With attractive exterior styling, LED headlights and packed with technology, the Mondeo Hybrid delivers comfort, smooth handling and excellent fuel economy. It comes equipped with a high-performance Lithium-ion 1.4-kilowatt-hour battery, which is smaller and lighter than previous batteries.

Paired with improved regenerative braking -- which captures up to 95 percent of the energy lost during braking and recharges the vehicle’s battery pack -- the Mondeo Hybrid offers drivers an efficient driving and ownership experience.

Ford’s C-MAX Energi plug-in hybrid is already on the road in China as a fleet vehicle.

Ford is expanding its China-based electrified powertrain development capabilities to support its growing EV lineup and manufacturing capability. The new energy vehicle team in Nanjing will also assist the global team to develop next generation EV technologies that can provide consumers with superior performance and greater fuel efficiency, as well as a smoother drive experience in all drive modes and integrated battery system design offering best-in-class interior space.

On top of global projects, Ford’s new energy vehicle team in China leads the development of unique components of new energy vehicles launched in China, such as charge cord and port. It is also responsible for the localization of key EV technologies and systems, including battery, battery pack assembly and powertrain controls validation and calibration, as well as homologation certification.

“Ford is committed to developing smarter, greener mobility solutions for the future, and our team in China will be at the forefront of this innovation,” said Trevor Worthington, vice president, product development, Ford Asia Pacific.

Ford will be showcasing the Mondeo Hybrid, C-MAX Energi and Mondeo Energi at a special event in Shanghai on April 8 and at Auto China 2017 from April 19-28.