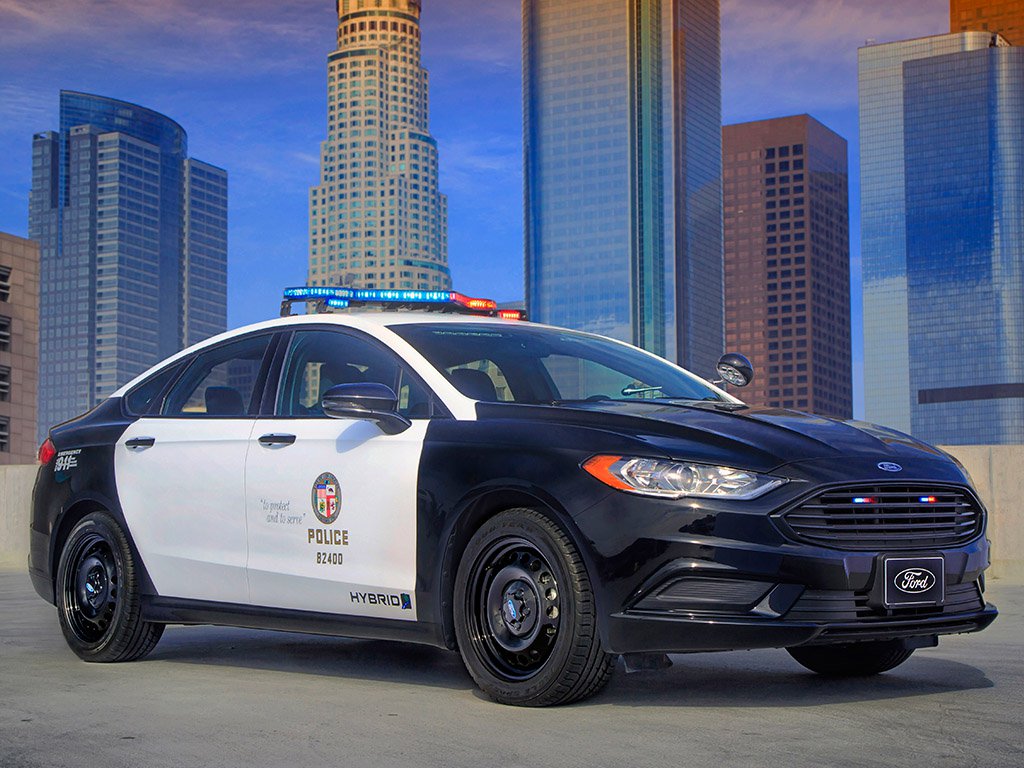 LOS ANGELES and NEW YORK, April 10, 2017 – Ford continues its drive to be a global electric vehicle leader – today revealing the second of 13 new electrified vehicles the company plans to introduce in the next five years.

The industry’s first pursuit-rated hybrid police car, the all-new Ford Police Responder Hybrid Sedan, is part of a $4.5 billion Ford investment to make electric vehicles that give customers greater capability, productivity and performance – plus better fuel economy. The plans are part of Ford’s expansion to be an auto and a mobility company, including leading in electric and self-driving vehicles, and new mobility solutions.

“Electrifying our next generation of vehicles is core to our unwavering commitment to sustainability,” said Joe Hinrichs, Ford president, The Americas. “By being a leader in electrified vehicles, we remain committed to delivering cars, trucks and SUVs that are better not only for our customers, but for the environment and society as well.”

As growing urban populations are overwhelming transportation systems and compromising air quality, first-time car buyers – including 50 percent of U.S. millennials – say they are interested in purchasing an electric car, according to a poll conducted by the Consumer Federation of America.

In fact, Ford predicts the auto industry will offer customers more hybrids, plug-in hybrids and fully electric vehicles than gasoline-powered vehicles within the next 15 years.

Ford sells the most police vehicles in the United States, with 63 percent market share. The company has been partnering with cities on custom law enforcement vehicles since the days of the Model T

The Police Responder Hybrid Sedan will help cities decrease emissions and offers the potential for significant fuel savings, both while driving and while idling. While driving, Ford’s patented hybrid technology is projected to provide EPA-estimated combined gas mileage of 38 miles per gallon – more than twice that of today’s Police Interceptor with 3.7-liter V6 with EPA-estimated 18 mpg combined. Actual mileage will vary. Final EPA-estimated ratings are not yet available.

While iidling, the Police Responder Hybrid Sedan’s lithium-ion battery helps power the high electrical loads of a police vehicle, reducing engine run time and saving an estimated 0.27 gallons of fuel per hour. Police Responder Hybrid Sedan customers could see nearly $3,900 a year in potential fuel savings per vehicle relative to the Police Interceptor, if a police vehicle is driven 20,000 miles per year, runs two shifts per day, 365 days per year, idles 4.9 hours per 8-hour shift, and is fueled at an average gas price of $2.50/gallon. Ford also is aggressively expanding its electric vehicle lineup in China. The company just announced that, by 2025, 70 percent of the vehicles it sells there will be electrified.

In addition, Ford is introducing the Mondeo Energi plug-in hybrid and an all-new fully electric small SUV with projected EPA-estimated range of at least 300 miles to customers in China.

In January, Ford announced a multimillion-pound project designed to help improve air quality in London. Ford is providing 20 Transit Custom plug-in hybrid vehicles to a range of fleets to explore how these commercial vans can contribute to cleaner air targets, while boosting operator productivity in urban conditions. The project is supported financially by the U.K. government-funded Advanced Propulsion Center.

Ford is working on a suite of services to make electric vehicles even easier to own.

“Innovative services can be as important to customers as the electric vehicles themselves,” said Hau Thai-Tang, Ford group vice president, purchasing, and the company’s electrification champion. “We are investing in solutions to help private customers as well as commercial fleet owners seamlessly incorporate these new vehicles and technologies into their lives.”

Ford has a memorandum of understanding with several automakers in Europe to create an ultrafast charging network projected to be significantly faster than the most powerful charging system deployed today. An initial target of about 400 sites in Europe is planned. By 2020, consumers should have access to thousands of high-powered charging points.

Ford also is piloting wireless technology on company electric cars in the United States and Europe to make recharging as easy as pulling into a parking spot, so drivers never forget to recharge. Wireless recharging extends electric-only range for short-distance commuters, even during quick stops. FordPass® also can help consumers find charging stations.