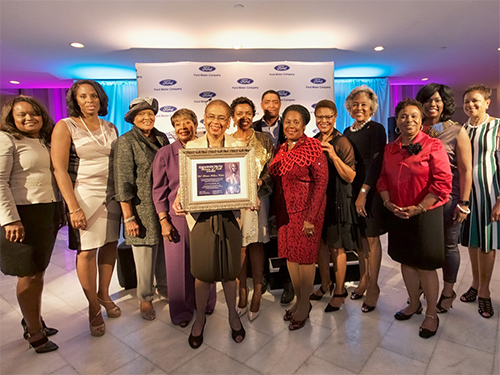 WASHINGTON, D.C., Sept. 20, 2017 – Ford Motor Company Fund, the philanthropic arm for Ford Motor Company, continues its support of the accomplishments of women at the Congressional Black Caucus Foundation’s 47th Annual Legislative Conference through its sponsorship of the Sojourner Truth Women’s Leadership Reception. The reception will be held Thursday at 8 p.m. and feature an exclusive performance by Grammy-nominated singer Ledisi. The gathering takes place at the National Museum of Women in the Arts, 1250 New York Ave., NW, Washington, D.C.

The reception supports the Sojourner Truth Legacy Project, an initiative of the Congressional Black Caucus Foundation to support and develop leadership skills for African American women. It honors the legacy of strength, service and perseverance of abolitionist Sojourner Truth, who continues to inspire new generations of women.

“Ford Fund and the Congressional Black Caucus Foundation’s Annual Legislative Conference are thrilled to share in the celebration of three leaders who have paved the way for young women to reach their dreams,” said Pamela Alexander, director, community development, Ford Motor Company Fund. “We are pleased to continue our partnership with the women of the Congressional Black Caucus to celebrate the Sojourner Truth Legacy Project at the Women’s Leadership Reception.”

Featuring numerous influential advocates of change, the reception also celebrates trailblazers who coninue to be outspoken champions for women, people of color and underserved communities. Ford Fund and the Congressional Black Caucus Foundation’s Annual Legislative Conference will present Dr. Mae Jemison and former U.S. Secretary of Labor Alexis Herman with the Woman of Truth award. The award is given to women excelling in leadership and commitment to the spirit of Sojourner Truth. Jemison is being honored for her contributions to science, technology, engineering and math initiatives, as well as the 25th anniversary of her historic flight into space. Herman is being recognized as a “hidden figure,” women around the globe who have made contributions to government as a civil servant.

Congresswoman Maxine Waters, Democrat of California and ranking member of the financial services committee, will be presented with the Woman of the Year award by her Congressional Black Caucus Foundation colleagues.

Each year, the foundation’s Annual Legislative Conference features events to provide African American members of Congress an opportunity to discuss their work on legislative issues and to engage attendees on policies critical to their communities.

Ford Motor Company’s support of the African American community dates back to the early 20th century when Ford was the largest employer of African Americans in the auto industry. Ford is building on its longtime support with signature initiatives that include: