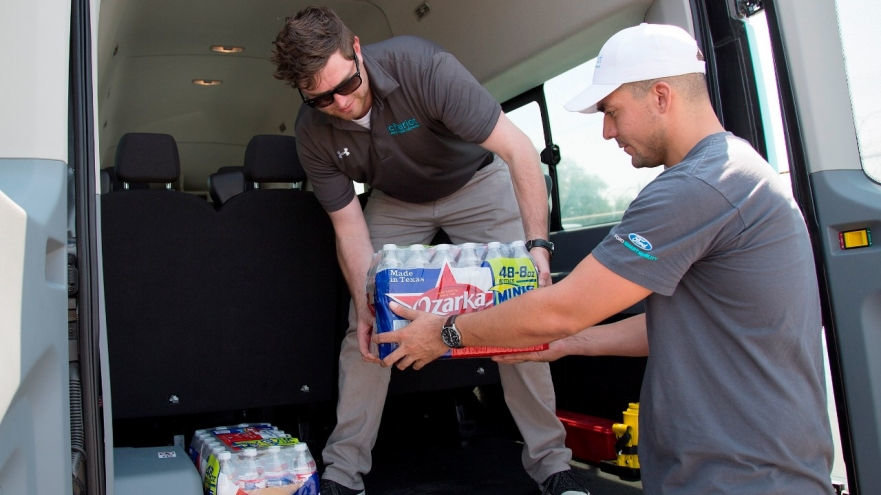 HOUSTON, May 11, 2018 – Nine months after the devastation caused by Hurricane Harvey, Ford Motor Company is reinforcing its commitment to the Houston community and continuing its support of ongoing recovery efforts in southeast Texas.

Ford employees, Houston-area Ford dealers and local nonprofits are gathering at Houston Food Bank today for a Texas Is Family community event that marks the donation of 38 Ford vehicles to eight organizations in the state. Vehicles will be used to enhance ongoing relief efforts by delivering food, mental health and medical services, as well as items such as diapers, personal hygiene kits, bug spray, cleaning supplies and coolers. Some vehicles will serve as first responder rescue and evacuation vehicles for future emergencies.

The Texas Is Family event demonstrates Ford’s strong connections in the Houston community and brings together many of the nonprofits the company has been working with since recovery efforts began last August. Nonprofits participating in today’s event include:

“Ford is the best in Texas because of our longstanding commitment to being a good neighbor, strengthening communities and helping make people’s lives better – in good times and in times of need,” said Jim Vella, president, Ford Fund, the philanthropic arm of Ford Motor Company. “We want to thank all of our employees, dealers and nonprofit partners who stepped up when the people of Houston needed them most. As another hurricane season approaches, we stand strong in our pledge to continue to help families and communities get back on their feet.”

Ford has provided a special Texas Is Family assistance bundle to more than 8,000 customers who lost or had vehicles destroyed in the disaster. This offer includes the same no-haggle, below-invoice price Ford employees and their families receive, as well as payment deferrals. More than 1,500 first responders in hurricane-affected areas have received a special $1,000 discount (in addition to all available incentives) on the purchase of a new Ford or Lincoln vehicle.

Ford has a long history of supporting disaster relief in the United States and around the world. In 2016, Ford implemented its first Disaster Relief Mobility Challenge, providing grants that enabled three nonprofits to purchase a custom Ford Transit cargo or passenger van to support their unique disaster response needs. The recipients – Team Rubicon, ToolBank and Catholic Charities – all received their vehicles last summer and also used them to support Hurricane Harvey relief.

Houston is one of 26 markets in the United States and Puerto Rico where Ford and its dealers have expanded their commitment to meet community needs by collaborating on programs and nonprofit outreach. The initiative, known as Operation Better World, was launched in 2008. Program outreach in Houston includes: