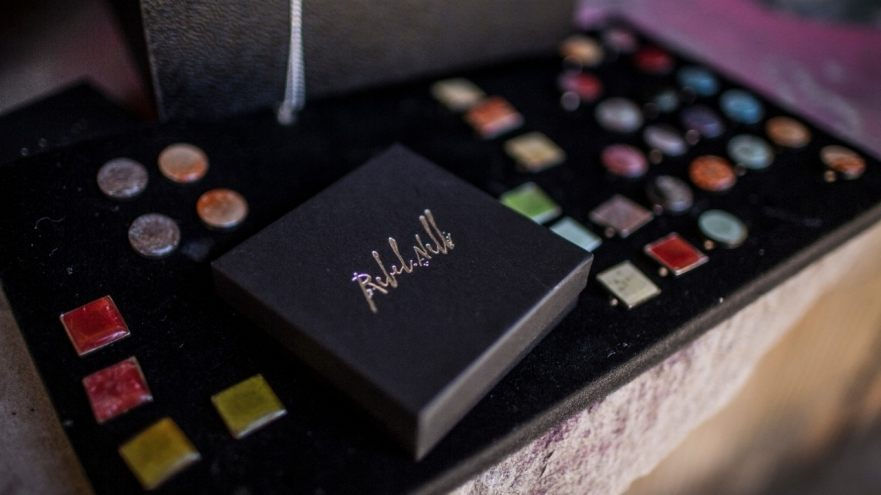 For years, the walls, columns and archways inside Detroit’s abandoned Michigan Central Station served as a canvas for inspired graffiti artists and muralists.

That fascinating chapter of the iconic building’s history isn’t about to be lost as Ford transforms the structure into an innovation hub to help it realize its vision for the future of transportation.

Ford commissioned Rebel Nell, a Corktown social enterprise, to repurpose layers of graffiti paint from inside the massive building into one-of-a-kind pieces of jewelry.

The result is the limited edition Michigan Central Station Collection, an assortment of pendants and earrings, each individually created from fallen graffiti.

“There is a story in every piece,” says Shawn H. Wilson, manager, community engagement at Ford Fund. “Over the years Michigan Central Station became an artist’s playground. Artists went there to perfect their craft and build their brands. Part of the reason we’re doing this is to pay homage to the artists.”

Ford worked with Rebel Nell to gather fallen graffiti from the lobby and other floors of the 500,000-square-foot building, which closed in 1988 and has remained vacant since. Wilson and Rebel Nell co-founder and CEO Amy Peterson said they were respectful of the artists’ works and only gathered graffiti that had fallen from surfaces.

“Graffiti is truly art,” Wilson says. “Rebel Nell was able to help us identify artistic components inside the train station and which graffiti to use.”

Rebel Nell, which has also created jewelry with graffiti from the Dequindre Cut and elsewhere in Detroit, has a strict “no peel” policy.

“We have respect for the muralists and the artwork they left behind,” Peterson says.

“It’s an amazing project to be a part of. The jewelry is a unique way to preserve and commemorate the legacy of the muralists who for decades left their mark on an iconic building.”

The collection is a limited run of 300 pieces. The pendants are in the shape of Michigan’s mitt and the city of Detroit’s geographical shape, as well as simple bars. There is a wide variety of pieces for men and women including pins, cuff links and bar necklaces. Prices range from $30 pins to $225 custom pendants, and many items are already sold out.

“We had an amazing response the first day we launched,” Peterson says. “Each piece is one of a kind. No one is going to have the same piece you have.”

Ford’s Wilson says the jewelry is another way of telling the many stories associated with the train station, which opened in 1913 and at its peak served as many as 4,000 passengers a day.

Everyone, it seems, has their own story to share about the station, whether it’s family members arriving from abroad to settle in Detroit, sons or fathers being sent off to war or returning from battle, adventurous young adults leaving to travel the country – or later, street artists finding their way inside to create.

“This project is really an example of a public-private partnership and a company like Ford paying homage and paying respect to those who helped sustain the legacy of the Michigan Central Station,” Wilson says.

Ford’s relationship with Rebel Nell goes back more than a year. Rebel Nell was one of the participants in the FREC (Ford Resource and Engagement Center) accelerator competition for social entrepreneurs. The company, located in shared workspace in Corktown’s Ponyride, was the winner and awarded $25,000 to help expand its business, aimed at helping disadvantaged women transition to full-time employment.

Proceeds from the Michigan Central Collection will benefit COTS, a nonprofit organization that provides housing and other services for the homeless; Vista Maria, a community resource for disadvantaged children and their families; Love Runs, which raises funds to fight modern day slavery in Michigan; and Covenant House, which supplies shelter and support to homeless, runaway and at-risk youth.

Not only does Rebel Nell offer these women important work but also reconnects them to the city, where most of them come from, says Delphia Simmons, chief strategy and learning officer for COTS. They gain an appreciation of their hometown and for the arts and crafts they are working with and help create, she adds.

The connections between the women, the city and the train station aren’t lost on Simmons.

“You hear a lot about renewal, Detroit rising like the Phoenix,” she says. “Detroit’s had bad times and so have these women. The city is coming back and that translates to these women as well. It’s helping position them to take advantage of the changes and rise like the city -- and the train station.”