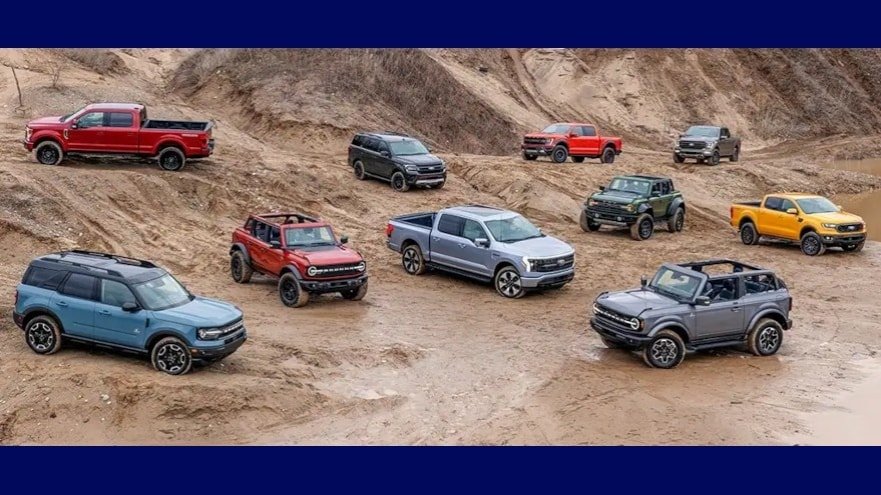 DEARBORN, Mich., April 4, 2022 – When Rachel Sampson took delivery of her 2021 Ford Bronco® last November, she joined a growing number of Americans choosing a four-wheel-powered vehicle to expand their capabilities in outdoor experiences.

Some 114 million Americans a year are now participating in outdoor adventure activities and as they seek to spend more time outdoors, more customers are choosing Ford for a four-wheel-powered vehicle than any other brand.

According to data from S&P Global Mobility, Ford sold 1.2 million four-wheel-powered vehicles in the United States in 2021 – roughly 18% more than the next best-selling brand, Toyota, and 42% more than Jeep.*

“Living in north Florida, we enjoy beaches all day, every day, and we do a lot of traveling to Georgia, too,” said Sampson, a former Nissan owner and mother of two who fell in love with the Bronco after its 2020 debut. “We enjoy top-down weather as much as possible.”

Growth in sales for four-wheel-powered Ford vehicles comes from a mix of new models, including the Bronco family of 4x4 vehicles, plus an uptick in the take rate for all-wheel drive in other popular nameplates like Explorer®. Growth is also coming from millennials** and women† – with both groups of buyers doubling their take rate of four-wheel-powered vehicles over the past decade.

“We know customers want SUVs for the additional cargo space and convenience, and also for the capability and confidence that comes with a four-wheel-powered vehicle,” said Dave Rivers, Ford U.S. SUV marketing manager, noting that three in four retail sales in 2021 were four-wheel-powered vehicles for Ford. “In some cases, it’s the day-to-day confidence of driving in snow, but it’s also the desire to get outdoors, get off-road and find new adventures.”

Any driveline setup that can send power to all four wheels – including 4x4, four-wheel drive, all-wheel drive and dual-motor all-wheel drive – constitutes a four-wheel-powered system. Rugged 4x4 systems that include a transfer case, such as on Bronco SUV, are designed to elevate off-road capability for those seeking more extreme adventures. These systems, also available on Expedition®, F-150®, Ranger® and Super Duty®, typically feature a mechanical or electric shift with 2-High, 4-High and 4-Low modes, as well as 4-Auto on select vehicles.

Since 2000†, Ford has led all automakers in U.S. four-wheel-powered vehicle sales, while one of its latest offerings – Bronco – has a lineage in extreme capability. In World War II, Ford participated in a government competition to build rugged carry-all utilities for GIs on the battlefield, producing more than 270,000 general purpose, or GP, vehicles for the Allied forces.

In 1951, a government contract called on Ford to design a quarter-ton 4x4 Military Utility Tactical Truck, or MUTT, to replace the M38 and M38A1 model jeeps. Design started in 1951, with testing and prototyping continuing through most of the decade.

While GPs were popular among returning servicemen for both work and play, Ford research in the early ’60s revealed they were too small and uncomfortable for civilian life, so a more refined, spacious off-road vehicle that still delivered durability was born – the Ford Bronco.

†Based on S&P Global Mobility new registrations among women including drive type: 4x4 all-wheel, 4x4 front-wheel and 4x4 rear-wheel drives, in the United States for calendar years 2012 to 2021.

††Based on S&P Global Mobility new registrations including drive type: 4x4 all-wheel, 4x4 front-wheel and 4x4 rear-wheel drives, in the United States for calendar years 2000 to 2021.

Ford Motor Company (NYSE: F) is a global company based in Dearborn, Michigan, that is committed to helping build a better world, where every person is free to move and pursue their dreams.  The company’s Ford+ plan for growth and value creation combines existing strengths, new capabilities and always-on relationships with customers to enrich experiences for and deepen the loyalty of those customers.  Ford designs, manufactures, markets and services a full line of connected, increasingly electrified passenger and commercial vehicles:  Ford trucks, utility vehicles, vans and cars, and Lincoln luxury vehicles.  The company is pursuing leadership positions in electrification, connected vehicle services and mobility solutions, including self-driving technology, and provides financial services through Ford Motor Credit Company.  Ford employs about 183,000 people worldwide.  More information about the company, its products and Ford Motor Credit Company is available at corporate.ford.com.