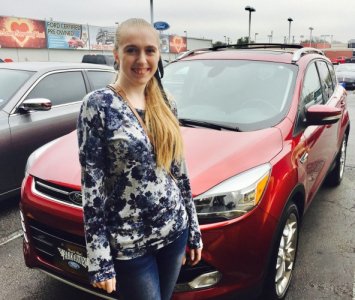 We love helping our customers find the perfect car for their lifestyle. Young Tory B. knew she needed a new car as hers was on its last leg. Out of school only a few years and working in her family's sports performance consulting business, she works hard each day and is a disciplined saver of her money.

"I had a budget and payment that I did not want to exceed," she said. "I knew I wanted something that had a sporty look and a little bit more room than the car I was driving."

Tory looked online earlier in the year and was interested in a pre-owned Ford Escape. Several dealerships had them but many did not have the features and mileage she thought would work for her needs.

She and her family reached out to Park Cities Ford Lincoln of Dallas that had four pre-owned Escapes for her to test drive. She compared a newer base model to a 2013 Ford Escape Titanium and she thought the ride and features were just what she wanted and the mileage was well within her guidelines. "My salesman Joe D'Angelo told me I was going to really like the Titanium model, and he was right!"

The vehicle qualified for a Ford CPO Warranty which is invaluable to a customer like Tory who doesn't want any surprise expenses tied to her vehicle. Park Cities Ford takes this and all of it's CPO vehicles through a rigorous 176-point inspection process ensuring that the vehicles are in excellent condition before they leave the dealership with a new owner.

Two days later, Tory and her father called us back to tell us they'd been driving in her Ford Escape that very day and heard another customer telling a radio talk show host how happy she was with the purchase of her pre-owned Ford Explorer and she commented on the helpfulness and knowledge of the salesman. When the radio host asked her where she had purchased it, she said, "Park Cities Ford." Tory said she just had to tell us that story because it made her feel so great about her own experience. Thank you Tory, we appreciate your business!