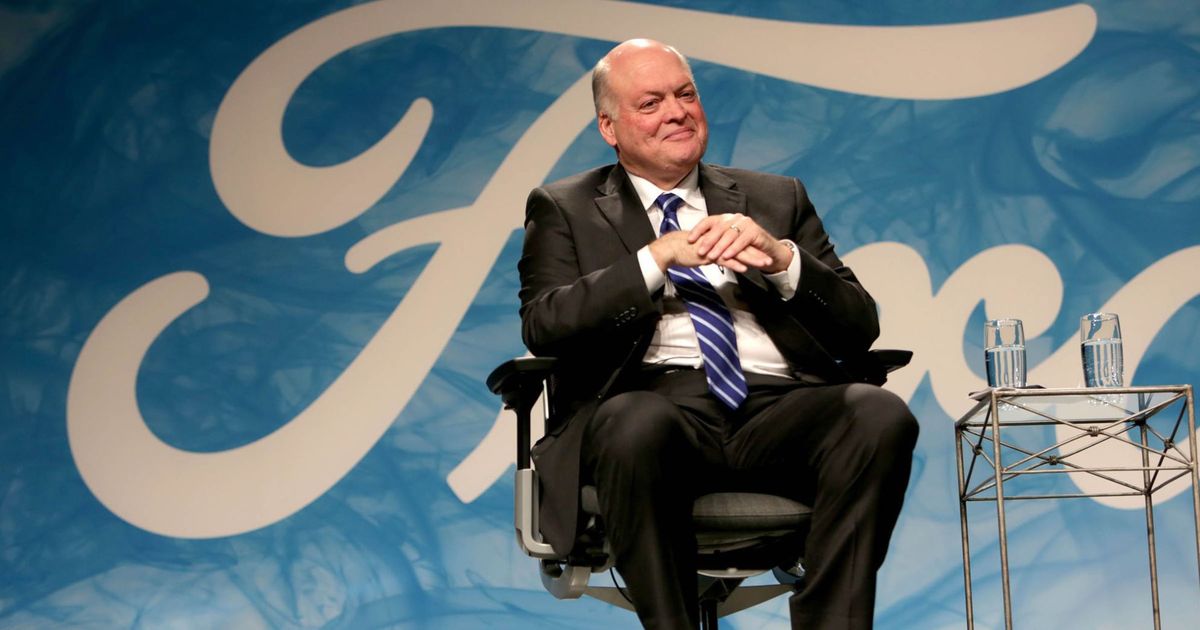 Hackett had invited Kelley, a legendary engineering designer and one of Hackett’s longtime business associates, to the Michigan-Ohio State game in Ann Arbor in 2015.

Before the game, Hackett, who was then the University of Michigan’s interim athletic director, walked on to the field as the crowd cheered, “Ha-ckett, Ha-ckett.”

Hackett, it seems, makes an impression.

And Kelley, founder of the IDEO design firm in the heart of Silicon Valley, expects him to make an impression with the workers at Ford, some of whom likely already thank him for securing Jim Harbaugh as the coach of Michigan’s Wolverines.

“I’m not worried about whether he’ll endear himself to the people in the company. That’s his superpower. People will want to work for him, I promise,” Kelley said, noting that the challenge will be in the scale of the job ahead. “It’s a Herculean job no matter who takes it.”

The auto industry is in a state of change, and making lots of cars and trucks is not a guarantee of success in the future. Ford’s stock price suffered despite profits during the tenure of Hackett’s predecessor, Mark Fields. New technologies, the race to develop autonomous vehicles, interest in other types of mobility, and competition from Silicon Valley and other areas will continue to challenge Ford and other automakers for the foreseeable future.

Bill Ford, executive chairman and the great-grandson of Henry Ford, touted Hackett’s Silicon Valley connections when he was introduced as CEO last month and called Hackett a visionary leader who will transform the company culture at Ford.

“I will break this rule just once in saying Alan really captured the hearts and minds of our employees and made them feel that not only could we win, but that we were going to win, and we are going to have fun on the journey. And I think that’s something very much you will see with Jim,” Bill Ford said, referencing Alan Mulally, who preceded Fields as CEO.

Kelley, who also is a Stanford University professor, said Hackett has been a regular attendee at TED conferences, which bring together big names in the tech world.

“I’ve met a lot of CEOs. Jim’s a really exceptional person as well as an exceptional CEO,” Kelley said, noting that Hackett is also someone who genuinely wants to hear from those further down the ranks.

Hackett, 62, who was chairman of Ford Smart Mobility before his promotion, receives high praise from his Smart Mobility team in Palo Alto, Calif., according to a report from Barclays, which had analysts there on a visit last month. Ford Smart Mobility is a Ford subsidiary designed to develop and invest in mobility services.

Brian Johnson, senior research analyst for U.S. autos at Barclays, noted that Hackett brought a philosophy to his role where the focus was on understanding not just what the customer wants but also what the customer needs and brainstorming from there.

Rather than chasing fads, Ford Smart Mobility has tried to fill unmet needs, according to the Barclays report.

As a result, the entity has focused on “some solid, yet unsplashy moves,” such as its $65 million investment in Chariot, a van shuttle service, the report said.

In the same announcement in which it touted the Chariot acquisition in September in San Francisco, Ford also touted a collaboration with bike-sharing provider Motivate and the creation of a City Solutions team “to work with cities around the world on their transportation needs.” That announcement included dire predictions about increasing congestion and environmental issues, which Hackett said could be alleviated by “fine-tuned” mobility options.

Chariot appears to be a major focus for the company, having expanded to Austin, Texas, and with plans to move into six additional markets. According to Barclays, Ford believes the market for so-called dynamic shuttles, which provide on-demand, shareable service, could hit $100-$200 billion by 2030.

Officials at Ford have long talked about the transformation of the automaker to an auto and mobility company, and Hackett’s own comments in a company presentation last year shed some light on where he sees that heading.

“Our traditional business is about selling cars to individuals and fleets; our emerging businesses are about providing transportation for passengers and goods,” Hackett wrote.

Three years after graduation, he joined Steelcase in 1980, rose through the sales and marketing ranks, and showed a feel for future trends, according to the New York Times.

Hackett led Steelcase for 20 years, and Ford, on its website, credits him with transforming the company “from a traditional office furniture manufacturer to a company that would change the way people work.”

Steelcase went through its own difficulties, including the recession in 2001, which prompted the company to cut thousands of workers. Speaking to the Detroit Free Press in 2005, Hackett described not just a difficult period that forced the company’s hand, but his belief in the need for change.

That change can be difficult to understand on an individual level, according to Hackett, but transforming a company is ultimately designed to ensure its survival.

“So the biggest challenge is trying to get people to understand that this evolution is about protecting jobs,” Hackett said at the time.

That exemplifies something else that Hackett often talks about — a concept of fitness.

Hackett wants his company to be fit, to thrive and people understand that concept, Kelley said.

Hackett described in a 2007 Harvard Business Review article how the launch of two products after he became CEO of Steelcase in 1994 influenced his thinking. One, the Leap office chair, was “an immediate home run.” The other, an office cubicle system called Pathways, was troubled from the beginning, dogged by feuding research and development groups, as well as a product recall.

“The concept was a breakthrough, but the development process was a breakdown,” Hackett wrote.

Hackett said he finally determined that a key issue had been not providing the time needed to think things through before trying to implement an idea.

“It takes a great deal of courage and confidence for people anxious to take the world by storm to slow down, think, explore all the possible options, and be ready to pull the plug if the information points away from success. At Steelcase, people are beginning to understand the difference between getting things done and getting things done right. By bringing thinking and doing into proper balance, we feel much better prepared to meet the future,” Hackett wrote.

Johnson, the Barclays analyst, said that level of understanding puts Hackett in the company of another leader who brought changes to Ford.

“Jim Hackett is someone who has thought a lot about how organizations work and the processes and the teamwork. He seems more in the mode of Alan Mulally, a CEO who is also a management theorist,” Johnson said, noting that Fields, Mulally’s successor, was largely maintaining the management model Mulally created, which succeeded for many years but is apparently about to get a makeover.