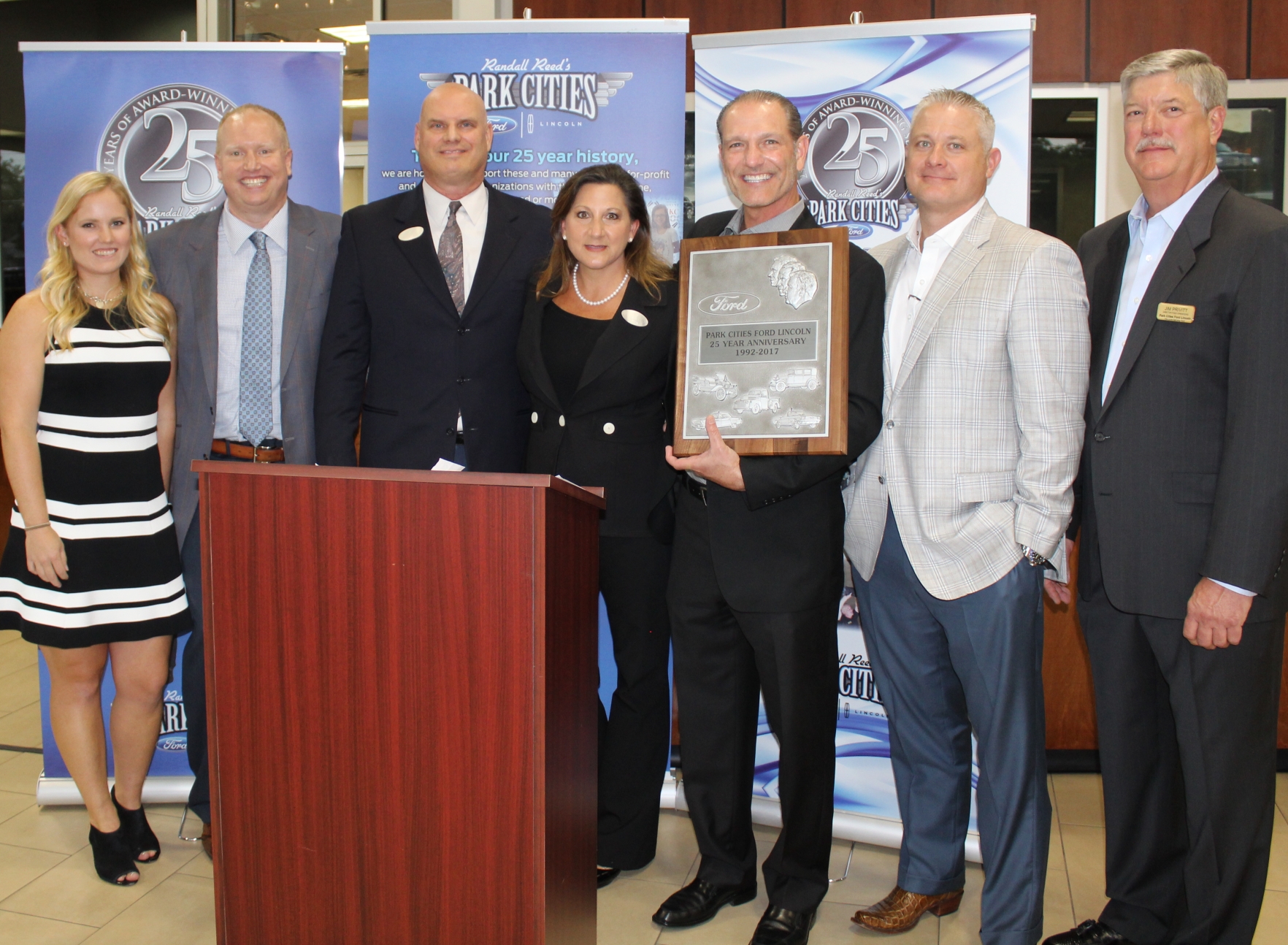 Randall Reed’s Park Cities Ford Lincoln of Dallas located in the heart of the city at Inwood Road and Lemmon Avenue, has been serving the greater Dallas community since August 1992 and this year marked its 25th anniversary Tuesday, August 1 with a private celebration.

The celebration included the Reed Family, Ford executives, friends, community associates, media and industry vendors who support the dealership and was held Tuesday, August 1 from 4:30pm to 7:00pm in the dealership’s main Showroom. Shelby Reed, daughter of founder Randall Reed and COO of World Class Automotive Group, represented her family at the celebration that included a presentation from Ford Central Market General Manager Kimberly Cape.

Throughout its 25 years of providing quality Ford products and services, Randall Reed’s Park Cities Ford Lincoln of Dallas has remained active in the community by supporting dozens of not-for-profit organizations with time, money and expertise including those related to health, education, arts, military veterans and persons with disabilities.

Randall Reed began his automotive legacy as a mechanic at a Ford store in Colorado. He later moved to Texas and grew into a sales leader and ultimately dealership partner. He and his wife Sherry Reed today own eight automotive dealerships in Texas and are recognized among the strongest independent dealers in the country. Reed’s team is comprised of more than 1,000 employees many of whom have worked at his World Class Automotive Group since its inception in the early 1990s. Reed’s automotive enterprises have amassed dozens of awards from Ford Motor Company (FMC) and Ford Motor Credit Corp. (FMCC) for their consistent top performances in sales, service, and customer satisfaction

Reed’s Park Cities Ford Lincoln is recognized among the top 100 Ford dealerships in the U.S. by FMC. It has also achieved 16 Ford President’s Awards and one Ford Triple Crown Award. Jeff Enright, Managing Partner since 1998, credits the store’s 165 employees for their dedication to serving every customer like a member of their own family. “On behalf of our entire team, we are proud to represent the Randall Reed brand in North Texas.”

“Our community has benefited from the dedicated support of an active corporate citizen like Randall Reed’s Park Cities Ford,” said Park Cities Ford Lincoln customer and State Representative Rafael Anchia, who has prepared a resolution commemorating the 25th anniversary.

“The long-term success demonstrated by Randall Reed’s Park Cities Ford Lincoln of Dallas is an example of the kind of growth that is still possible even in today’s rapidly evolving economy,” says Kimberly Cape, General Manager of the Ford Central Market. “We are proud to partner with Randall Reed and his team for our continued success in this dynamic community.”

“All of us at Park Cities Ford Lincoln of Dallas are so honored and proud to have served the Dallas area community for 25 years,” said Shelby Reed. “On behalf of my father and mother, Randall and Sherry Reed, we are extremely thankful for our customers and our community partners, and we look forward with great enthusiasm to another 25 years.”