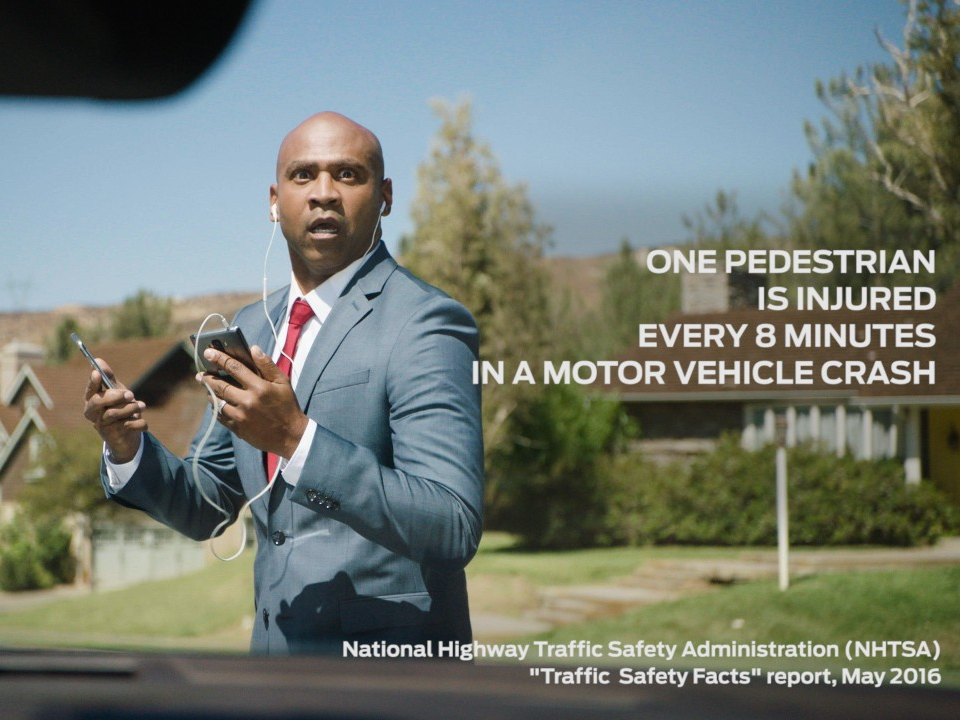 DEARBORN, Mich., Oct. 24, 2016 – Collisions can be caused not just by distracted driving, but increasingly, distracted walking. Every eight minutes, a pedestrian is injured in a motor vehicle crash, according to a recent report from National Highway Traffic Safety Administration. This rise is linked to a global influx of “petextrians” – people walking while texting.

Ford’s new Pre-Collision Assist with Pedestrian Detection can predict the movement of pedestrians to help reduce the severity of and, in some cases, eliminate frontal collisions altogether. Debuting in North America as an available technology for the 2017 Ford Fusion, the system has been developed to help recognize pedestrians using more than 240 terabytes of test data – equal to 20.4 trillion books, or 600 Libraries of Congress with 34 million books each.

“Since we are trying to avoid a collision that hasn’t happened yet, prediction of the future is an inherent part of the puzzle,” says Scott Lindstrom, Ford driver assist technologies manager. “Having a huge cache of data – based on real-world driving conditions – helps our system be smart enough to determine what may happen in a second that has not yet even occurred.”

Cities around the world are tackling the increasing problem of “petextrians” and distracted walking. A theme park in Chongqing, China, painted smartphone lanes on 30 meters of sidewalk in an effort to combat the problem. And officials in Seoul plan to expand similar signage across South Korea next year. Pedestrians crossing the tram tracks in Augsburg, Germany, are now warned by a strip of blinking red LED lights mounted on the ground. The tiny town of Rexburg, Idaho, took a different approach, passing a law in 2011 against texting while crossing the street and slapping a $50 fine on anyone who does.

Ford Pre-Collision Assist with Pedestrian Detection uses combined radar and camera technology to scan the roadway ahead for collision risks. If one is detected, the initial response from the vehicle is to provide a visual and audible warning to the driver and temporarily mute the audio system. If the driver does not react to the warning, the technology can automatically apply up to the vehicle’s full braking force to help reduce the severity of, or even eliminate, a frontal collision.

Aaron Mills, Ford safety engineer, says the more test data was gathered and then used to develop the vehicle’s algorithm to help it recognize a wide variety of human sizes and shapes. “We were startled to see how oblivious people could be of a 4,000-pound car coming toward them,” he says. “It was a real eye-opener to how distracted people are today.”

Working in daylight and in clear weather conditions – at speeds up to 50 mph – Ford’s system processes information collected from a windshield-mounted camera, which has been taught to classify different vehicle and pedestrian scenarios, along with radar located near the bumper to pick up shape reflections. The technology then combines both data streams using a unique Ford algorithm that calculates the risk of a collision. While the system may be especially helpful in unexpected situations, it does not replace the driver.

Ford is testing advanced features for future vehicles that could allow the system to operate at night, in low and harsh lighting conditions, and when vehicles and cyclists move in different directions.

Using 12 vehicles, Ford conducted 500,000-plus miles of development testing in Europe, China and the United States, racking up more than one year – 473 days – of data logging. In just 15 weeks in North America alone, the technology recorded more than 3 million scans of roadside objects, vehicles and pedestrians across roughly 70 percent non-highway and 30 percent highway miles.

Petextrian: “One who texts while walking, usually unaware of their surroundings” (Urban Dictionary, 2009)