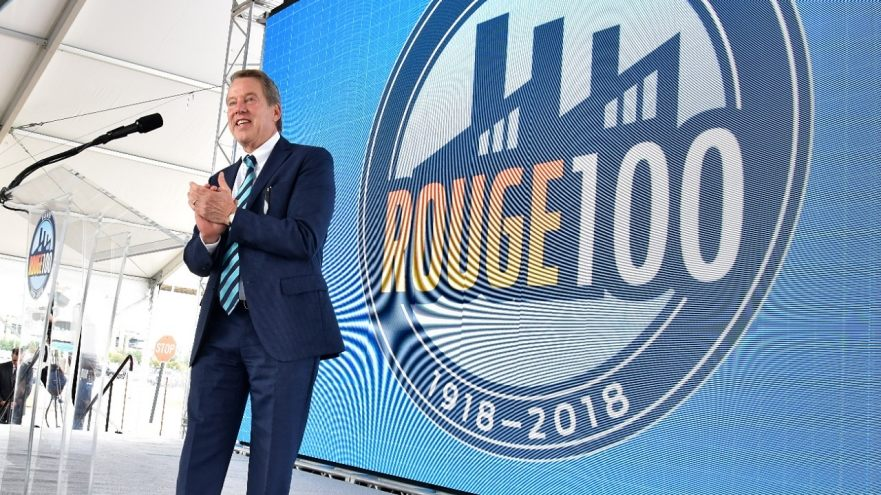 The 100th Anniversary Of The Rouge: Ford’s Legendary Automotive Factory Readies Its Next Act

To read profiles of the hard-working Rouge employees and stories of historic innovations, plus view an interactive timeline and learn more fun Rouge facts, visit social.ford.com.

DEARBORN, Mich., Sept. 27, 2018 – Ford Motor Company’s Rouge complex is the only one in American history to manufacture vehicles – including ships, tractors and cars – non-stop for 100 years. There’s nothing else like it. It’s kept running through two world wars and 18 U.S. recessions, all while producing some of the world’s most famous vehicles -- from the Model A, to the Mustang to the F-150.

It started in 1918 when the plant began producing Eagle Boats for the U.S. Navy during World War I. Today the facility’s 7,500 employees work three shifts round-the-clock to manufacture America’s best-selling vehicle: The F-150 pickup.

Now, as Ford commemorates the 100th year of production at the Rouge, it is prepping the plant for its next act, which includes producing a hybrid-electric F-150 in two years.

“Just as the Rouge has been a harbinger of progress for a century, Ford is committed to ensuring our trucks continue to power the world in a sustainable way – whether they are powered by EcoBoost engines, hybrid powertrains, or are fully electric,” said Bill Ford, executive chairman, Ford Motor Company.

The Rouge will produce these transformational vehicles using the latest technologies in robotics, 3D printing and virtual reality, thanks to Ford’s newly opened $45 million Advanced Manufacturing Center in Redford, Mich. And by helping to further train Ford’s workforce on the latest technologies, courtesy of a $35 million expansion of the UAW-Ford training facility just a few miles from the plant, the Rouge is positioned to remain a plant known for innovation, sustainability, efficiency and prosperity as it heads into its second century.

“The Rouge complex is where UAW members for generations have built quality products and earned the dignity and respect of the automotive community,” said Rory Gamble, UAW-Ford Vice President. “In many ways, the Rouge complex is the heartbeat of the all that the American labor movement represents.”

Rouge: The First 100
The Rouge is where the industrial revolution took hold. Henry Ford’s vision for the facility was that it would become a fully integrated, self-sufficient manufacturing powerhouse.

By the 1930s, more than 100,000 workers punched in at the complex every day. If the Rouge were a city, it would have ranked as the fourth biggest in Michigan at the time. It’s no wonder the Rouge had its own fire department, police force, and hospital – plus a power plant, steel mill, glass factory, and hundreds of miles of rail and assembly line. Ore came into the complex, and vehicles emerged in as little as 28 hours.

The Rouge became a symbol of the determination and productivity of the American worker. It’s where the $5-a-day wage took hold and helped give rise to the middle class. The plant also is known for events that tested the resiliency of employees and the relationship between unions and companies. The Battle of the Overpass, when Walter Reuther and his union workers were beaten while for trying to organize workers, changed the thinking of people across the country, including Henry Ford.

Eighteen recessions over the century meant constantly rising and falling employment numbers at the Rouge. Six employees died in a power plant explosion in 1999, with more than a dozen others injured. And yes, there was even a time in the early 2000s when some suggested the Rouge should be shuttered. Instead, Bill Ford and the company doubled down, transforming the aging complex into a modern and sustainable manufacturing powerhouse.

Along this journey, more than 10 million people have toured the Rouge. The guest list includes countless celebrities and political officials, including President Bill Clinton in 2004 and Facebook founder Mark Zuckerberg.

“To us, it’s more than a factory,” Bill Ford said. “It’s a source of pride for generations of workers who have built the best cars and trucks in the world. It’s an all-American symbol of strength, opportunity, and hope; a place where we’ve always been creating tomorrow together.”

What’s Next at The Rouge
As new technologies disrupt the industry, Ford has opened a 135,000 square foot Advanced Manufacturing Center in nearby Redford. At the same time, the UAW and Ford are expanding a training facility just a few miles from the Rouge in Allen Park so employees can learn how to adapt to these disruptions. The goal: Create the workforce of the 21st century.

Ford designed these facilities to accelerate the pace of manufacturing innovation in the company’s areas of strength, including robotics, 3D printing, virtual reality and process innovation including collaborative robots, artificial intelligence and digital factories.

“New technology and innovation continue to be hallmarks of all Ford plants – inspired by what the Rouge has been known for during the past century,” said Joe Hinrichs, president of Global Operations. “We will continue finding new ways to apply new technology and tools to deliver high-quality vehicles for our customers and even more meaningful work for our hourly workers.”

These tools aim to improve the already remarkable efficiency of the facility and its 7,500 employees. During the plant’s three-crew shift cadence, a new F-150 rolls off the end of the assembly line every 53 seconds. In 2020, the plant begins producing the first F-150 Hybrid.

With the switch to aluminum for F-150 bodies in 2014, the plant added a patented aluminum recycling system. This closed-loop system, with two miles of duct work and computer-controlled gates, has helped Ford recycle 12 to 15 million pounds of aluminum a month at the Rouge. That’s enough to build more than 37,000 F-series truck bodies a month – equaling 144 million to 180 million pounds of aluminum per year.

The plant, which recently reached zero-waste-to-landfill status, is also part of the company’s broader water reduction strategy. Ford’s long-term goal is to use zero potable (drinking) water in its manufacturing processes.

Plus, to further help clean the nearby Rouge River, Ford is launching a volunteer program with Friends of the Rouge, a local NGO dedicated to cleaning up and preserving the Rouge River.