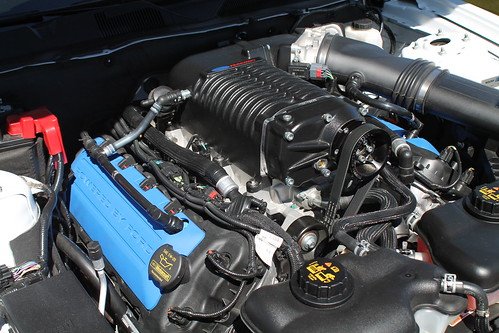 What is a Performance Chip and can it Help my Ford?

Your Ford's engine is controlled by a computer equipped with a chip that tells the computer how and when to regulate the car's fuel-to-air ratio, timing, and other parameters. Thus, the chip is a programmed extension of your car's computer system, which informs how the engine responds to different driving conditions. In this post, the experts at Planet Ford Dallas will discuss what these chips do, how they work, and whether having a performance chip on your ride is worthwhile.

What's the Role of Car Chips?

The factory chip in your Ford contains something commonly known as a “lookup table.” As the name suggests, the table contains data that informs the motor how to respond to different circumstances. For instance, when driving on Interstate 30 at 60 miles per hour and you suddenly floor the gas pedal, the computer detects the action before asking the chip about what needs to be done.

Once the chip receives this information, it will refer to its lookout table before telling the computer how much fuel should be sent to the engine. Besides, the computer will also receive information regarding when and how to shift your transmission to a lower gear and how to modify the timing.

Most late-model Ford cars come with computerized engines that run on multiple factory chips. The chips work in tandem to transfer information to the vehicle's computer and ultimately control its actions. However, unlike it was in the past, cars no longer use removable factory chips.

Before OBD-II chips debuted in the mid-1990s, cars came with removable “PROM” chips containing all the computer's programming and lookup tables. However, the original PROM chips were single-use, and therefore, once programmed and installed, they couldn't be erased or reprogrammed. Hence, the only way to change programming was by unplugging the old chip and replacing it with a new one.

New Ford models, including those you'll find at Planet Ford Dallas, feature re-programmable memory chips similar to those in your home PC. Therefore, the chips are like mini-computers that plug into your car's diagnostic port and can hack the original software to modify the lookup tables and parameters.

A Look at Aftermarket Performance Chips

If you feel that your car's performance isn't up to scratch, you can still install a performance chip. This has become one of the most common aftermarket mods. Most Ford owners in Dallas and elsewhere install performance chips on their cars to get best-in-class fuel economy, torque, and horsepower gains. You also get a smoother ride, sharper throttle response, and better CO2 emission standards.

Since the plug-and-play chips you'll find at car modification shops in Dallas provide these benefits concurrently, it's possible to choose different customization tunes on the go. What a performance chip does is override Ford's factory settings to give your car that extra oomph in terms of more power and torque.

By altering crucial engine parameters, performance chips make your Ford more responsive. Nonetheless, it's best to keep in mind that the results you get after installing performance chips depend on the type and quality of the chip used. Depending on your needs, you can find chips programmed to boost your car's horsepower, fuel mileage, or even throttle response.

How Much HP Does a Chip Add? 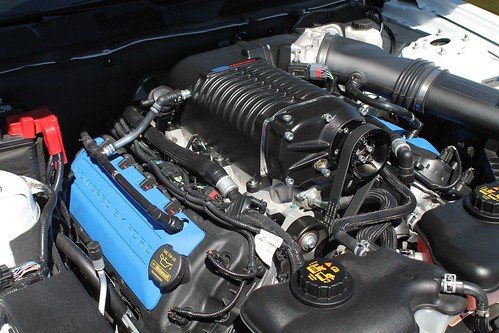 “Supercharged Ford V8 Engine” by Priceman141 licensed through CC BY 2.0

Generally, manufacturers claim that their performance chips can give your gasoline engine a performance boost of up to 35 HP. The numbers are even higher for cars with diesel and turbocharged engines. Although these numbers are attainable, it's best to remember that horsepower increase depends on your Ford's natural engine capacity.

Also, installing performance chips on your Ford may come at a price. For example, under some conditions, you may experience a loss of power, thus hurting drivability. Likewise, the vehicle's overall performance may end up being sacrificed in your search for a marginal improvement in power output.

What are the Possible Downsides of Performance Chips?

Arguably, no aftermarket mod has got all pros and no downsides, and performance chips are no different. Although an aftermarket chip won't necessarily ruin your Ford's engine, you'll undoubtedly experience some downsides after installing it, not to mention the potential damage to the engine during installation.

One of the most vital functions of your car's ECU is regulating emissions. Nonetheless, performance chips disable the system and affect its ability to emit fuel waste in the form of exhaust emissions. As a result, your car will undoubtedly fail emission tests in Texas. Besides, performance chips may increase your costs. As the car's fuel economy drops, the use of coolants and lubricating oil will increase.

So, it may be needless to install a performance chip on your vehicle when there are better alternatives for improving its performance and MPG. When you bring your car to Planet Ford Dallas, we'll give it a performance boost without sacrificing other crucial parameters. Contact us today to schedule an appointment with our experts.